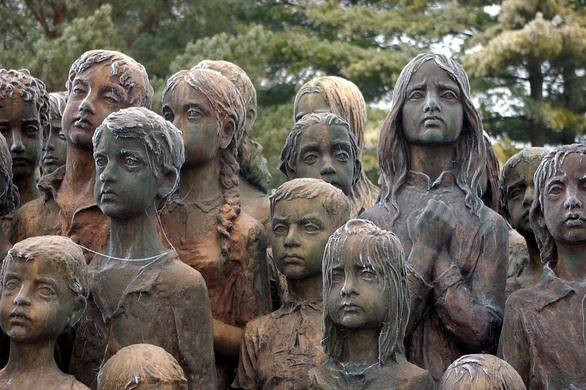 
The soulless eyes of 82 bronze children stare on forever in remembrance of a horrifying World War II massacre. The tiny Czech village of Lidice just northwest of Prague was barely on anyone’s radar until it became the victim of a terrifying reprisal for the assassination of a high ranking Nazi official that saw most of the populace killed or deported. Possibly the most tragic victims of this massacre were the children who are remembered today by The Memorial to the Children Victims of the War, otherwise known as “The Lidice Children,” a bronze huddle of 82 small figures with baleful looks in their eyes. In 1942 Reich Protector Reinhard Heydrich was attacked by a small strike team that threw a grenade at his car, causing him wounds that would quickly prove fatal. Nearby Lidice was targeted as having harbored the soldiers who killed Heydrich and the punishment was devised by Hitler and Himmler themselves. Every adult male from the village was rounded up and taken to a farm on the outskirts of the village where they were shot down ten at a time. The women and children were then separated and sent to separate concentration camps. The village itself was completely razed, with even the buried dead being destroyed.

After the war ended Lidice had become a symbol of the Nazi atrocities and those that survived (153 women and 17 children) bravely rebuilt their demolished village.

In memory of the events of World War II the memorial that stands today has 82 figures in honor of the 82 children that were sent to the gas chambers. The work took 20 years to complete and the original artist, Marie Uchytilová, died before it could be completed, however others stepped in to finish it. The result is a stark bronze work with the life-size children staring towards a future they would never live to see.


Lest We Forget - Never Again
Peas be with ewe
Mal
Posted by Mal Kiely [Lancelots Pram] on Monday, January 23, 2017