THE worst music album of all time - official

The Shaggs - "Philosophy Of the World" (1969). Three Wiggins' sisters, with no musical talent whatsoever, who 'obeyed' their father to write and record these songs, and release this album...

The Wiggin sisters themselves never planned to become a music group, but as Dot later said, "[Our father] was something of a disciplinarian. He was stubborn and he could be temperamental. He directed. We obeyed. Or did our best."

"There's an innocence to these songs and their performances that's both charming and unsettling. Hacked-at drumbeats, whacked-around chords, songs that seem to have little or no meter to them ... being played on out-of-tune, pawn-shop-quality guitars all converge, creating dissonance and beauty, chaos and tranquillity, causing any listener coming to this music to rearrange any pre-existing notions about the relationships between talent, originality, and ability. There is no album you might own that sounds remotely like this one." 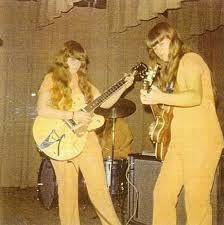 "Philosophy of the World is the sickest, most stunningly awful wonderful record I've heard in ages: the perfect mental purgative for doldrums of any kind," wrote Debra Rae Cohen for Rolling Stone in a review of the 1980 reissue. "Like a lobotomised Trapp Family Singers, the Shaggs warble earnest greeting-card lyrics (...) in happy, hapless quasi-unison along ostensible lines of melody while strumming their tinny guitars like someone worrying a zipper. The drummer pounds gamely to the call of a different muse, as if she had to guess which song they were playing - and missed every time."

"Without exaggeration," Chris Connelly wrote in a later Rolling Stone article, "it may stand as the worst album ever recorded."

Oh... my FAVOURITE quote: "Reportedly, during the recording sessions the band would occasionally stop playing, claiming one of them had made a mistake and that they needed to start over, leaving the sound engineers to wonder how the girls could tell when a mistake had been made."
➽ Here is a video about it and them:
➽ This is what they sound like:

➽ Yes, it all really sounds like this! Honesty - it's a REAL album - this is no joke!

This album is SO bad, it's hilariously listenable!

Email ThisBlogThis!Share to TwitterShare to FacebookShare to Pinterest
Labels: Music