The other day I was out shopping in the new K-Mart store in town, just generally having a look around and picking up a few small items I needed. I had my black haversack that I usually carry about with me, and rather than use a shopping trolley, I popped the items into my backpack, with the full intention of pulling them out and paying for them. As I was browsing through the book section ( I can't resist checking out a good book, you know), I spotted an empty trolley sitting there, so I put my stuff into that rather than in the bag. I love the way they layout these stores because you walk around in a big circle going from section to section, just window shopping and daydreaming. Dreaming of all the things you could do with all that stuff... if only you had the dollars! 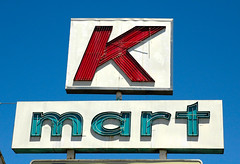 By the time I got to the women's clothing section, I knew I was done (nothing there fitted me... just kidding!), so I made for the checkouts with my trolley. I pulled out the bits I'd got for the car - some spare fuses, some bubble-eye mirrors, 2 spare globes, rust-converter, and slid them down the conveyer belt. I re-checked my little shopping list (I seem to live by lists nowadays... must be a sign of old age...) - yup, I'd gotten everything I'd written down no problemo. I paid for the stuff, slipped them and the receipt into my bag, and started walking out of the doors. Then all hell broke loose.

Alarms sounded. lights flashed. Security guards and the duty manager started walking towards me, and I was thinking, "What the f@ck?" I had nothing to hide, so I showed them my bag. Must have been a bodgy alarm or something. I knew the receipt was in there.

"What's this thing here, then, sir?" the big muscly security guard spoke accusingly down at me. All I could see was his big bloody gun at his side! He'd pulled out a big thick hardback copy of a John Grisham thriller. I didn't remember putting that in there?!?

"Did you pay for this item, sir?" He spoke again in the same accusingly disarming manner. I didn't know what to think... my mind actually went blank. All that came out of my mouth was a dry "aaahhh..."

He checked the receipt as a sweat rose across the back of my neck, creeping across my forehead. The duty manager said it wasn't on the receipt, and the guard took my arm and started to lead me off in a way that led to no confusion as to whom was suddenly in charge. "Come with me, sir, and I'm sure we can sort this out," the manager said unsmilingly, walking in front of the guard and myself.

There must have been some sort of mistake! I was utterly confused, frightened, paranoid, and yet I knew I'd done nothing wrong at the same time! I was totally awash with mixed emotions as they led me through the store towards the back corner, where the manager's office was located. The looks of shoppers bore through me as I was escorted through the aisles, and I blushed in embarrassed shame at this unbelievable predicament I'd suddenly found myself in. The manager opened the plain grey wooden door, and I was told to sit on a chair in front of his desk, which I did without complaint. Before I could say anything in my defence, the manager told me not to move, and that he had to make a phone call and get some paperwork for us to fill out. As quickly as we'd come in, he turned and walked back out the door, locking it hurriedly behind him.

I sat utterly dumbfounded in that chair. I don't remember picking up that book, but... but... I must have... but... how? When? It wasn't on my list! My mind raced, thinking back to my journey through the store. Of course! I had been looking at all sorts of different books, thinking of a birthday prezzie for someone, and I guess... I don't know... I must have inadvertently put it in my bag... I must have got distracted or something... I honestly didn't remember doing it! Still, I sat there, alone. In the K-Mart Manager's office. He was going to call someone... get some paperwork...?

The penny dropped, and my blood turned to ice as it dawned on me that he was going to call the police! They thought I was a shoplifter! Shite! This is just NOT happening! I thought I was going to cry! I was so scared, my pulse was racing at a million bpm. What was I going to DO? How could I, an upright local citizen, get busted for shoplifting? But - I hadn't done anything! This was too shameful! What would the boys think? What would M think and say?!? This was the ultimate humiliation. And I sat in that quiet office, waiting... waiting...

I had to do something... I was desperate! Looking over my shoulder, I noticed a small window facing out over the carpark, just above a small grey cluttered filing cabinet. I wasn't going to be humiliated like this - no way! Without even thinking about what I was doing, I was up out of my chair and climbing across the top of that filing cabinet. The paperwork went flying everywhere, but I didn't care... the only thing I could think of was getting OUT of there! The window opened outwards, and I threw my bag out as I started to pull the top half of my shaking body through that small window frame.

It was at that moment the K-Mart store manager opened the office door and walked back in. Vaguely aware of him behind me, I redoubled my convulsive efforts to get out of that bloody window and get away from this mess I was somehow in. Then I felt it - his vicelike grip around my ankle! I was suspended in mid-air, totally stuck half-hanging out of the office window, my face bright red from embarrassment and exertion. He was pulling on my ankle, trying to yank me back in, pulling pulling pulling. But I had to get away. Not shoplifting! Not the police! He just kept pulling on my leg...

(Thanx to DE for the original idea).
(Originally posted March 2009)

Peas be with ewe
Cyalayta,
Mal :)

Subscribe to this Blog
Posted by Mal Kiely [Lancelots Pram] on Wednesday, November 10, 2021