(Originally posted: June 2022)
It shook me when it happened, and now, six months later, the whole concept still staggers and overwhelms me... plus its size and the amount of debris it pushed into the high atmosphere! "NASA determined that the eruption was "hundreds of times more powerful" than the atomic bomb dropped on Hiroshima" (Source).
This Wikipedia article about it shows the sheer power of it all, with lots of info, videos, etc.
This is what it sounded like in nearby Tonga when the volcano exploded, over the horizon.
This is what it sounded like 700kms away in Fiji.
... and as seen from space...
The accompanying Tsunami (filmed here by fishermen c.2 km offshore of Ecuador) caused damage as far away as 10,600km / 6,620 miles away!
To give a size comparison of the blast... 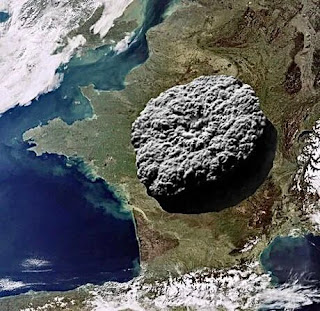 This is transposed over France.
Six months later the effects are still seen in our sunrises and sunsets all around the world! (cf. Article) Peas be with ewe
Mal